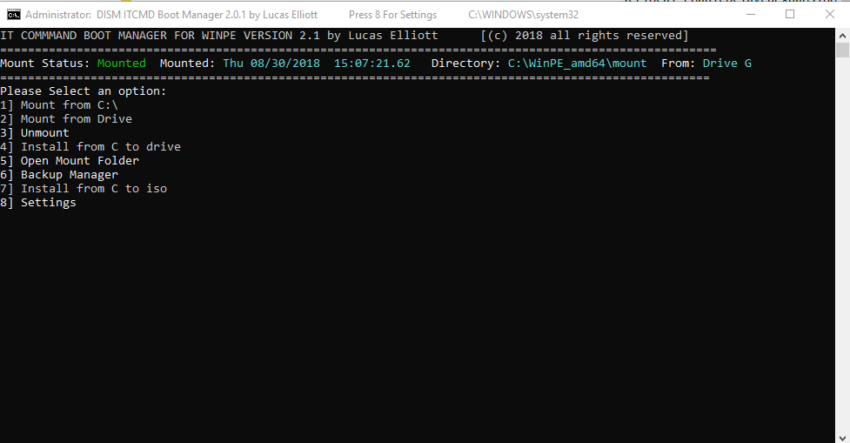 If anyone reading this has worked with WINPE (Windows Preinstallation Environment) before, you’ll know it can be a pain in the butt to create, manage, and modify the WinPE drives.

If you’re not sure what WINPE is you should:

Long Story Short, WINPE is a tool used to install windows 10 but can also be very useful since it provides a very simple and feature-cut CMD.exe window with no restrictions For example, you can modify system32 without knowing the system’s admin password. It’s kind of like safe-mode on steroids.

The DISM tools themselves are actually batch based (really cool), but unfortunetly have some errors in them that make the code crash frequently (not so cool).

The WINPE DISM Manager (WDM) helps bypass DISM’s common errors and even has optimized versions of the DISM tools in its code. WDM by IT Command adds a colorful text-based interface for managing WINPE Drives. It also adds some awesome features like backing up drives and previewing changes.

Check out this quick 30 second commercial for it:

Here is a more in-depth demo of the tool:

WDM guides you through the following:

There are some features currently in development

There are some things we’re stuck on but would love any help from the community:

WDM has been a near three year project and is still being added to every few months.

Try it out and start messing with WINPE now!